Harvey Fierstein
Edna Turnblad is the agoraphobic laundress mother of Tracy Turnblad and a central character in Hairspray.

Edna is an anxious, self-conscious, laundress who has isolated herself in her home for eleven years.

She loves her daughter very much, but she worries that Tracy's is too ambitious and that she will be hurt by how unforgiving the world can be. Instead, she implores her daughter to take her head out of the clouds and focus on more practical skills.

Edna often gets annoyed with her husband, Wilbur, for encouraging Tracy and "putting ideas in her head", stating, "they're gonna hurt her, Wilbur."

Despite her anxiety, Edna is Tracy's biggest supporter and defender, even when it lands them both in jail. 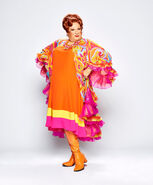 Edna and her daughter, Tracy.
Community content is available under CC-BY-SA unless otherwise noted.
Advertisement